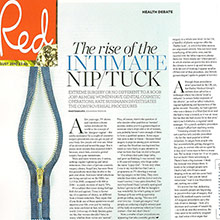 The rise of the intimate nip/tuck

A few years ago, TV shows and countless column inches introduced the world to the concept of the "designer vagina" - the catchy nickname for a couple of cosmetic surgery procedures you can get on part of your body few people will ever see. Most of us shivered and turned the page. But it seems more women than expected didn't because, since then, cosmetic genital surgery has gone mainstream.

More and more women are, it seems, seeking vaginal tightening and labial reductions. One chain of private cosmetic surgery clinics, SurgiCare, has seen those two procedures more than double in the past year alone. And more labial reductions are being carried out on the NHS, too: 1,118 in 2008, compared with 404 in 2006 - a yearly increase of nearly 70%.

It's a subject that raises strong feelings both for and against. Those in favour say it's a question of choice, no different from a breast reduction. They argue that if you think one of these operations would improve your life, even just by making you more confident in bed, well, it's a free world. Critics say it's body fascism gone too far, that women shouldn't have to worry whether their vulvas are "normal".

"I've always had quite large labia, and grew up thinking it was normal," says a 38-year-old woman, who blogs under the name "Lippy Girl". "It was only when I was in my mid-thirties that I saw a programme on TV showing a woman having surgery on her labia. They were smaller than mine, and the doctor said she wasn't normal. I was quite disturbed. The next boyfriend I had, I actually apologised before I got my kit off. But he thought it was wonderful. So what's going on here? Teenage girls are writing agonising postings online, saying, "No-one will ever love me - I must get surgery." And people are reducing a highly sensory pan of the body on a premise which isn't even correct - that men don't like it."

Now, a swathe of new procedures are appearing that take cosmetic genital surgery to a whole new level. In the US, a handful of plastic surgeons offer the "Barbie look", in which the labia minora are amputated entirely. You can have laser resurfacing of the pubic area, and fat injected into the labia majora to plump them out. More drastic are "clitoropexies", in which stitches are put in the skin above the clitoris to move it up and inwards, with the aim of making it appear smaller. (When told of that procedure, one British gynaecologist I spoke to gasped in horror).

Although these procedures aren't practised in the UK yet, the Harley Medical Group's website does advertise a technique where the clitoral hood is reduced "to ensure better exposure of the clitoris", as well as labial reduction, vaginal tightening and liposuction of the pubic mound. "Recently, we had a patient who was a dancer in a West End show and she had to wear a leotard, so it was an issue for her that she had excess fat in that area," says Lisa Littlehales, a regional nurse manager. "It's a purely aesthetic procedure - it doesn't affect how anything works.

"Trimming around the clitoris is not a particularly popular procedure - by far the most popular is labial reduction. It ranges from people who feel uncomfortable getting changed in the gym, to women who are so upset by it they don't even want to have a smear test. We've done it here for 15 or 16 years, but we hadn't been advertising it.

There's been a big increase. I think the demand was always there. It tends to be younger people now. I had a lady who'd had a nasal shaping with us, and she came back in and said, "! see you do labial reductions." And it was BlackBerry out, sorting out a date."

It's stories like that, indicating how casually people are beginning to perceive this type of surgery, that have UK medical experts worried. All surgical procedures carry the risk of nerve damage - both of a decrease and increase of sensitivity - so with an area this sensitive, the risks need to be carefully weighed up. And some critics argue that cosmetic genital surgery could even be illegal. The UK's Female Genital Mutilation Act bans any procedure that "excises, infibulates or otherwise mutilates the whole or any part of a girl [or woman]'s labia majora, labia minora or clitoris", even with their consent. The exception is when the operation is "necessary for her physical or mental health".

When it comes to data about the safest techniques and figures on complication rates - the kind of basic information any patient should have there's nothing, according to a recent review in the British Journal Of Obstetrics And Gynaecology. "The labia is not just additional skin that's redundant," says Or Deborah Boyle, a gynaecologist at the NHS Royal Free hospital in north London. "It's sensitive, and some people have orgasms that originate, in part, from the vulva. Also, it seems to me, anecdotally at least, that there is perhaps a higher risk of wound breakdown with this type of surgery than any other. Lack of research is a problem".

On that last point, both those for and against agree. Several surgeons, who do these kinds of operations, are involved in a large study at King's College London that will measure psychological, as well as surgical, results. Dr Angelica Kavouni, a London-based plastic surgeon, who is participating in the study, says, "If the procedure is done with care, then it's no higher risk than any other procedure. It's been done for many years, and interest from patients has made doctors look for better, more sophisticated techniques".

"As someone with uneven labia, I've looked into having them balanced,' says Rachel, 30, who works in marketing. "I'm still toying with the idea, but I'm hesitant. Do men even notice or care? I imagine that if a guy commented on it that would make me paranoid and might give me a push to do something about it."

What worries some doctors is that a lot of people, like Rachel, do their research on message boards or websites for clinics abroad, where there's no guarantee of accuracy. Take the clitoral-hood reduction, for instance. While the Harley Medical Group's website doesn't claim that it will make it easier to orgasm, plenty of American websites do, despite there being no reliable proof. "Claiming that having less skin there will make the area more sensitive is very simplistic," says Dr Kavouni.

But speak to women who've had the operation and you get the sense that we're in the middle of a backlash to the backlash. "I've read quite a lot of articles, all pretty negative, and it makes me angry," says Anna, a British woman in her early forties, who last year had labial reduction. "People call it "female circumcision",' she says. "It's not. It's just excess skin that's unsightly and can be uncomfortable. I wish I'd had it done before. It's been liberating - I don't dread sex any more.'

"I've had a smattering of women who feel so strongly they've said they would consider doing it to themselves if that was the only way," says Dr Boyle, who has performed labial reductions herself. "It's caused me to do a lot of soul searching. Is it appropriate to "correct" symmetrical labia? Sometimes, it's enough to be reassured that you're normal by somebody who sees a lot of vulvas. Others - women capable of making decisions in other aspects of their life - want to go ahead despite the risks. Is it right to stand in their way?"