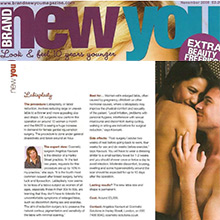 Labiaplasty is the fourth most common request after breast surgery, tummy tuck and liposuction

The procedure: Labiaplasty, or labial reduction, involves reducing large or uneven labia to a thinner and more appealing size and shape. UK surgeons now perform the operation on around 10 women a month and the BACD is seeing a huge increase in demand for female genital rejuvenation surgery. The procedure is done under general anaesthetic and takes around an hour.

The expert view: Cosmetic surgeon Angelica Kavouni is the director of a Harley Street practice "in the last two years requests for this procedure are up by 10% in my practice," she says. It is the fourth most common request after breast surgery, tummy tuck and liposuction. Labiaplasty now seems to be less of a taboo subject as women of all ages, especially those in their 30s to 60s, are learning that they don't have to tolerate the uncomfortable symptoms of enlarged labia, such as discomfort during sex and exercise.

Best for ... Women with enlarged labia, often caused by pregnancy, childbirth or other hormonal causes, where a labiaplasty may improve the physical comfort and sexuality of the patient. "Local irritation, problems with personal hygiene, interference with sexual intercourse and discomfort during cycling, walking or sitting are indications for surgical reduction," says Kavouni.

Side effects: "Post-surgery I advise two weeks of rest before going back to work, four weeks for sex and six weeks before exercise," says Kavouni. You will have to wear a dressing similar to a small sanitary towel for 1-2 weeks and you should shower once or twice a day to avoid infection. Moderate discomfort, bruising, swelling and some hypersensitivity around the scar should be expected for up to 10 days after the operation.

Lasting results? - the new labia size and shape is permanent.

Alyson Jackson, 46, from London, was self-conscious about her labia so opted for discreet surgery.

I have always been self-conscious about my labia. As a gregarious woman who embraces life, I felt incredibly embarrassed about how I looked in changing rooms. I hated undressing in front of others, especially a partner, and avoided oral sex at all costs.

I saw a TV advert for labiaplasty and went to see my GP, who pointed me towards Angelica Kavouni. I was very nervous before the procedure. I knew it was the right decision, but no one likes to go through a general anaesthetic and be under the surgeon's knife. Afterwards, I felt very sore and the recovery was more painful and uncomfortable than I'd thought it would be, but Angelica gave me good instructions for aftercare.

Now that everything has healed, I am very happy with the results. Although I am still single, I have much more confidence. There's been a bit of debate about "designer vaginas" but if you are unhappy with your anatomy, and surgery is right for you, then go for it - as long as it's definitely for you, not to please someone else.