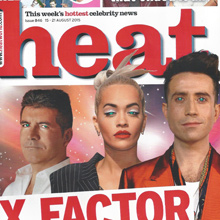 Er, Angelina Jolie, what's happened to your neck? On her recent trip to Myanmar, we couldn't help noticing some odd changed to the side of her face - it looks like she's had a "ribbon facelift", where threads of suture are inserted near the jawline and pulled to tighten the face.

"It's possible she could have got a ribbon lift or a little touch-up. It's not a full-on facelift-it's milder," says Tahl Humes, director of aesthetic medicine. "Also, it's possible she had more fat around there when she had it done, so you couldn't see the line. Now she's loosing weight, you can notice it more."

It was first rumored that Angelina had the procedure in 2010, with surgeon Abel Mounir saying, "It looks as though she's received the ribbon treatment from the gathering of skin just below her earlobe." Angelina didn't comment on the reports.

Ms Angelica Kavouni, London's leading thread lift surgeon, tells heat, "It could be Angelina has had threads inserted. Initially, when placed, they're pulled a little tight to give them space to settle, and maybe this is why they seemed to disappear in 2012. It's not uncommon to have threads repeated every two years. It's a less invasive way to keep the jawline taut during your forties, and there is very little downtime or bruising. It's just a shame that Angelica is so lean, they seem to show."

So now we have to worry about our necks sagging as well as all the other bits? Harsh. 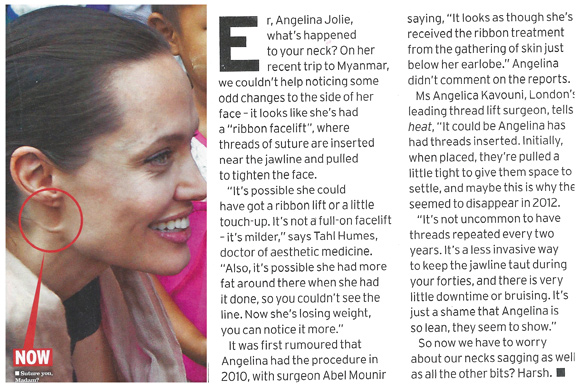