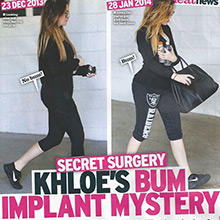 In just five weeks, Khloe‘s got a new bum.

Her sister Kim is the proud owner of the most famous booty in showbiz and now it looks like Khloe Kardashian is after her crown. In just five weeks, Khloe 29, has transformed her bottom from run-of-the-mill-curvy to how-is-that-even-possible-bootylicious. But how did she do it? And was silicone involved?

An insider tells heat, “Khloe‘s been going for the same treatments that Kim‘s used in the past, having fat sucked off other parts or her body - her inner thighs and hips - and redistributed on her bottom. But she's also been working out like crazy, doing hundreds of squats a week with weights. She‘s really modelling her new single self after Kim, copying her hair, dress sense, and now her bum.”

And leading plastic surgeon Angelica Kavouni thinks that Khloe could have even gone further. “It looks to me like Khloe may have had buttock implants”, she tells heat. “It is very difficult to mimic this extra-full shape with fat transfer alone. Not only would you need an extreme amount of tummy fat for harvesting, but you can only really inject around 100-200ml per procedure which is about a cup full, again not enough to give this same result.”

Kim and Khloe's personal trainer Gunnar Peterson is an expert in helping his clients get more junk in their trunk. “I get asked. Do you have any exercises to help people build their butt?” he tells heat. “Before, all you got was: How do you make them smaller?” But are his techniques alone enough to have wielded such dramatic results? Khloe is known for her intense exercise regime, but Reebok Sports Club personal trainer Roger Snipes tells us, “I would suggest that this result isn‘t realistic through exercise alone. Only an extreme boot-camp style training program could produce such results.”

Yikes, so it seems that, either way, Khloe has resorted to dramatic lengths to get a bum to rival Kim‘s. How long until Kourtney gets a bouncy castle welded to hers? 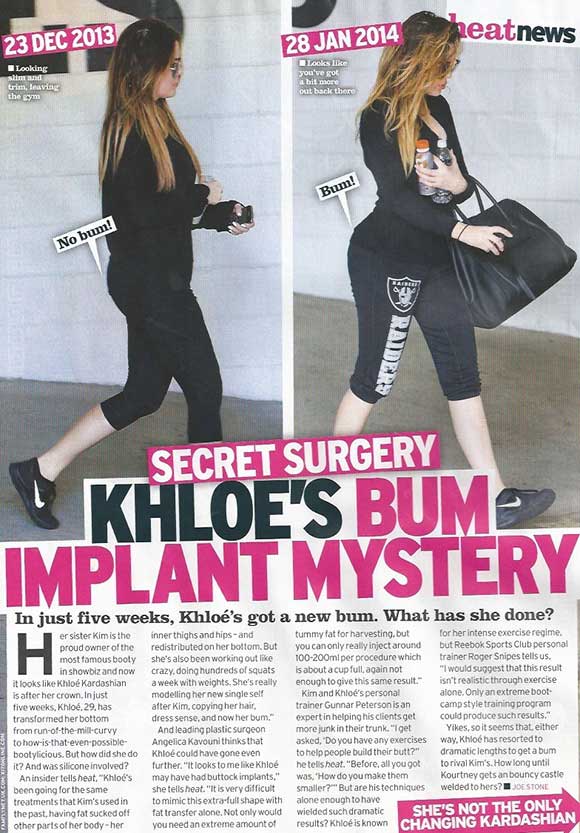