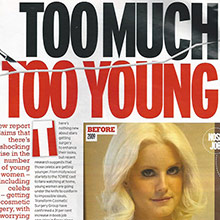 A new report claims that there's a shocking rise in the number of young women-including celebs -getting cosmetic surgery, with worrying results ... By Kay Ribeiro

There's nothing new about stars getting surgery to enhance their looks, but recent research suggests that those celebs are getting younger. From Hollywood starlets to the TOWIE cast to fans watching at home, young women are going under the knife to conform to impossible ideals.

Transform Cosmetic Surgery Group have confirmed a 31 per cent increase in boob job enquiries in Essex alone, and claim that young girls show photos of the TOWIE cast to consultants in a bid to look like their idols.

"Young women are bombarded with images of this Barbie-doll look that's unattainable without nips and tucks. The earlier you start the more it could become a habit," warns psychologist Baljit Rana.

"It may also be disguising other issues they may have regarding self-esteem, it might also result in depression down the line, or contribute to an addictive personality."

Leading cosmetic surgeon Angelica Kavouni confirms that many treatments are not needed and can actually be detrimental "It really is not necessary for women under the age of 25 to have injectable treatments, especially anti-wrinkle treatments," she tells us.

"If you stop one set of muscles moving, other groups take over and get stronger, so theoretically lines appear elsewhere." 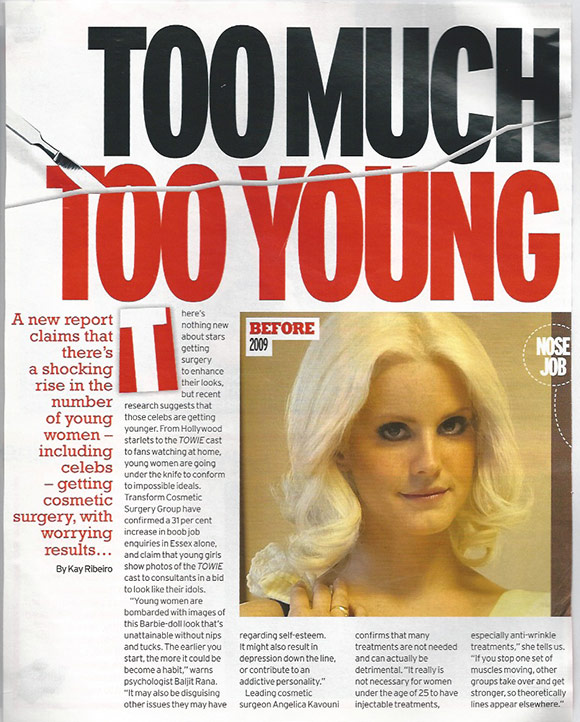