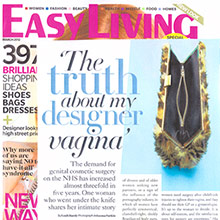 The demand for genital cosmetic surgery on the NHS has increased almost threefold in five years. One woman who went under the knife shares her intimate story.

Let's face it, few of us would describe our genitals as our best feature. And thankfully, to most of us, how we look "down there" is pretty irrelevant. After all, who gets to peer at our most intimate regions up close? Yet for all that, in the UK, 2,000 women a year have their inner labia, or labia minora, reduced on the NHS. It's possible this is a result of divorce and of older women seeking new partners, or a sign of the influence of the pornography industry, in which all women have perfectly symmetrical, clamshell-tight, sleekly Brazilian-ed body parts. This "pornification" trend recently spurred a group of women to stage a "Muff March" protest down Harley Street, complete with fake, overgrown muffs.

While the controversy rages, the fact is that the more open discussion of such techniques is making them more available to women who feel they need help, as consultant plastic surgeon Paul Banwell, who specialises in the procedure, points out. "There is no normal or abnormal, just a spectrum of normality. Some women need surgery after child birth injuries to tighten their vagina, and they should see their GP or a gynaecologist. It's up to the woman to decide. It is about self-esteem, and the satisfaction rates for surgery are enormous." His patients, he says, "cut across all age groups, from late teens to women in their sixties. They are professionals, businesswomen and mothers."

Last year, teacher Sarah Watson, 41, from North London had surgery to reduce the size of her inner labia. She describes why she opted for "designer vagina" surgery. "I had my first serious boyfriend at 17. Steve was 21, and more sexually experienced than I was. I remember being on the sofa at a friend's house just touching each other, and he blurted out, "Do you realise you have more down there than other women? Most girls aren't like that." I instantly knew what he meant. The inner lips of my vulva hung down around 2cm below the outer lips and were dark coloured. They were also lopsided, with one side longer than the other. I was convinced there was something wrong.

I'd never looked at pornography, but the women in paintings or arty photographs always looked neat, very unlike me. So Steve's comments, which weren't meant to be cruel, confirmed all my worst fears. They absolutely crushed me. I felt self-conscious and abnormal. I even wondered if I was part-male. When I looked in the mirror naked, I'd cry. Steve never mentioned it again, and I did lose my virginity to him.

Between the ages of 25 and today, I've only had two relationships. I married at 27 but divorced at 31 when my husband met another woman. Then, after five years of celibacy, I got together with David. Both times I made my partner wait over a year before I would have sex with them, as I was so scared of showing them my body. The idea of being touched down there made me shudder. My lack of relationships is one of my great regrets and one of the reasons I wish I'd had this surgery years ago. I never felt relaxed and didn't see myself as a sexy woman.

The problems didn't end there, either. Smear tests were a nightmare and my long labia would get caught in my underwear, move from side to side and pull, which hurt, especially if I was cycling. They also rubbed against clothes, which could be painful, and I think might have caused the constant thrush infections I suffered. I felt self-conscious in a swimsuit, never wore pretty knickers in case something fell out, and never even had a bikini wax.

David and I had been together for five years when I saw a programme which featured a woman who had an operation to reduce her labia. I was instantly sure that this was what I wanted and contacted the cosmetic surgeon from the show, Angelica Kavouni. I trusted her and she agreed to perform the procedure, but insisted I tell David. I went home, and said, "I want to have some surgery. I haven't felt right for a long time." He looked astounded, and as I couldn't bring myself to say any more, I drew a diagram. He gave me a hug and said, "I'm very happy with you as you are, but if you want to do this, I'll support you."

I had the operation under local anaesthetic and was awake throughout, though I couldn't see anything because of surgical drapes. Angelica trimmed the labia using surgical scissors and I had tiny dissolvable stitches along the cut edges. The procedure was incredibly straightforward. Ironically, the only part that hurt was when I was given an injection of painkiller at the end, and it was unpleasant when Angelica sealed the wound with a laser, as there was a terrible smell of burning flesh. But then it was all over and, after an hour in the recovery room, David picked me up.

I didn't have sex for two month. I'm sure it would have been okay to do it much earlier, but after spending £3,000 on the procedure I wasn't going to risk spoiling it! As for the result, I love it. Now, when I stand in front of the mirror, nothing pokes out. I feel normal. David makes occasional jokes about "my expensive naughty bits", and to be honest I don't think he feels any differently about me. But I feel so much better, and my sexual confidence has soared. I wish I'd done it years ago. I could have had more fun, more relationships, and not spent so much time single and worried. People say that women have labiaplasties because they want to look like porn stars. That's not true of me. I don't look like Barbie. It's reasonable to want to change something you don't like about yourself and it makes me angry when people make judgements. They don't have the right to tell me what to do with my body."

The process includes labial reduction, fat transfer to the outer labia to fatten them, liposuction to the pubic mound to flatten it out, removing "excess" skin from around the clitoris and vaginal tightening.

A us gynaecologist, Dr David Matlock, coined the term "designer vagina". His procedures include laser vaginal rejuvenation and the creepy option of having a "16-year-old's vagina."

Can a woman's sex life be improved by having a tighter vagina? Some surgeons claim it can, but this ignores the importance of the clitoris and the many sensitive nerve endings in the labia. Psychologist Or Virginia Braun doesn't believe that improving the look of labia can help, either. "Smaller labia do not create more self-confidence; the mind does that." 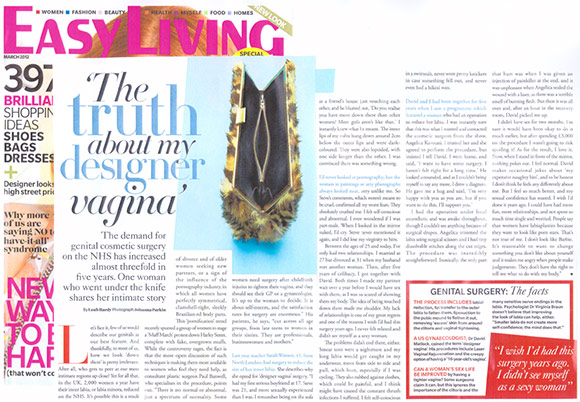