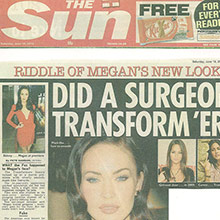 Riddle of Megan's new look, did a surgeon transform me?

The Transformers beauty turned up at a movie premiere with utterly smooth, mask-like features.

The 24-year-old's appearance sparked speculation she has had Botox, while a slight trout pout suggested collagen lip jabs.

The American once known for her girl-next-door charm was in Los Angeles for Thursday's premiere of her western Jonah Hex.

A Hollywood source said: "Megan was so naturally sexy - that's why she was considered the best-looking woman on Earth. But recently she's looked too skinny, stiff and a little fake."

Transformers director Michael Bay ordered Megan to regain her curves for this year's sequel after telling her she was too skinny, leading to a furious bust-up.

It has since been announced that she will not appear in the third movie.

My view - by Angelica Kavouni

Megan's shiny forehead and elegant arched eyebrows are a sure sign of Botox treatment. In fact, I advise my patients to always keep some mineral face powder handy for those shiny moments.

Her lips look unnaturally full and she may well have had injections of permanent filler or even Permalip silicone implants inserted. The loss of her top lip's pretty "cupid's bow" is a common indicator of lip augmentation. And that is something which, in my opinion, should be avoided - as it leaves the top lip looking like a sausage. 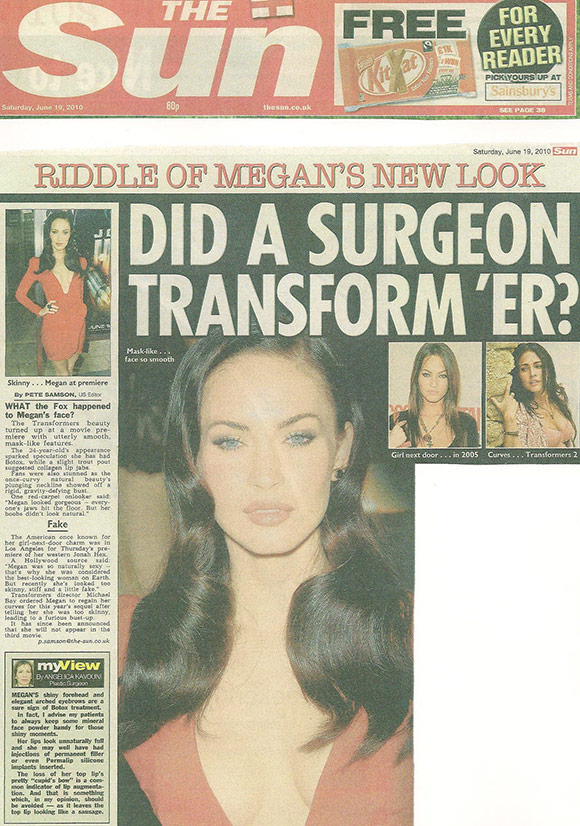