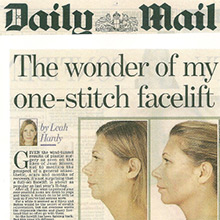 The wonder of my one stitch facelift, it's the ultimate quick fix for turkey necks

It's the ultimate quick fix for turkey necks ... just make sure to look away when they come at you with an eight-inch needle.

Given the wind-tunnel results of plastic surgery as seen on the likes of Joan Rivers, not to mention the prospect of a general anaesthetic, scars and months of recovery, it's not surprising that a full-on facelift is about as popular as last year's It-bag.

After all, if you want to pretend your ever-youthful looks are down to yoga and water, it doesn't do to be seen to look as if you've had serious work.

For a while it seemed as if fillers and Botox would be the secret or stealth rejuvenation, but not everyone wants the chipmunk cheeks and glassy forehead that so often go with them.

So the facelift has been fighting back. But this time it's different.

The new "One-Stitch Facelift" is a minimally invasive, super-sneaky way to lift cheeks and jowls, reduce double chins and tighten saggy necks. It is done under local anaesthetic and involves having just one stitch on each side of the head, buried in the hair. The results look natural and the procedure is ideal, say surgeons, for women from around 40 onwards, who don't need the full works, but feel their sagging skin is making their race look tired and old. Women like Madonna, who is rumoured to have had a similar treatment. And now me!

At 47, I have become increasingly jowly. The skin on my face has slowly drooped as I have got older.

My skin is good and I don't have wrinkles, so I'm OK with my reflection full face, but for the past year or two the sight of my horribly slack profile has started to depress me.

I've always been appalled by the idea of a full-on facelift. I tried Botox in my lower face to try to freeze the muscles than pull down the jowls, but that gave me a distorted "Joker" smile.

Plastic surgeon Angelica Kavouni has a different approach. Her "one-stitch facelift", involves placing a line thread down the cheeks from the hairline and pulling up sagging skin from the inside by a sort of pulley system. It takes just 30 minutes to an hour, can be done under local anaesthetic and leaves you scar-free.

After a consultation in her Harley Street office, we go to the operating room. Angelica injects me at the temples and down the cheeks with local anaesthetic, which stings but is bearable.

She then shows me the thread, which looks like plastic fishing wire with ten tiny knots along it, each capped by a miniature cone. These are made of dissolvable, natural glycolic, and catch in the deep layers of my skin, anchoring the thread and allowing the skin to be hoiked upwards. The thread is made of non-biodegradable polypropolene. It stays in the skin for ever, but Angelica promises me it has been used safely in surgery for decades.

What really catches my eye is the dauntingly thick, 20cm long needle to which it's attached. To get this monster in my head, Angelica needs to make a tiny cut in the thick skin and muscle at my temples, which she says "Is very strong, so it can safely anchor the thread". I barely feel this, but as the giant needle is pushed down past my eyes and over my cheeks I wince. There is a moment or sharp discomfort as the needle is pushed out of the side or my cheek, parallel to my mouth. The thread is then cut. At this point Angelica pulls the thread and I experience the completely odd sensation of my cheek skin being hauled up from the inside. Even worse, as everything is so close to my ear, I can hear the knots and cones moving under my flesh - a sort of grinding sound, like the tide over pebbles. Then the thread is attached to the muscle at my temple, and the tiny Incision is closed with a stitch.

I ask for a mirror, and it is instantly clear that one side of my face is noticeably tauter and more defined. That's a good thing, because I still have to go through the whole thing on the other side.

After 40 minutes it's over. Looking in the mirror, my jawline looks more defined, my cheeks lifted - I definitely look younger.

There's no pain at all, just a tenderness in the cheeks.

When I get home I examine my cheeks. I can see two tiny scabs forming where the needle emerged and there is a little yellow bruising, but I simply pop on some concealer and feel confident about facing the world, especially as the tiny stitch itself is hidden by my hair. With make-up, I could go back to work that day, and certainly the next. I'm delighted.

Three days later my cheeks are still slightly tender to the touch, but there's no swelling, the slight bruising and marks have faded.

To be frank, no one notices anything different about me, but this is a discreet and subtle tweak. However, looking at the before and after pictures, I'm absolutely thrilled with the improvement to my profile. I look years younger.

I am told the results of the Silhouette Lift last around live years before the ageing process takes over, but even in five years I won't look worse than I did before the treatment.

Before I underwent the procedure Angelica told me: "If you don't like the result, it's reversible, because I can cut the strings and in time your face will go back to how it used to be."

I'll be keeping my new face, thank you very much. But I'm not sure I'll be in a hurry to see that giant needle again. 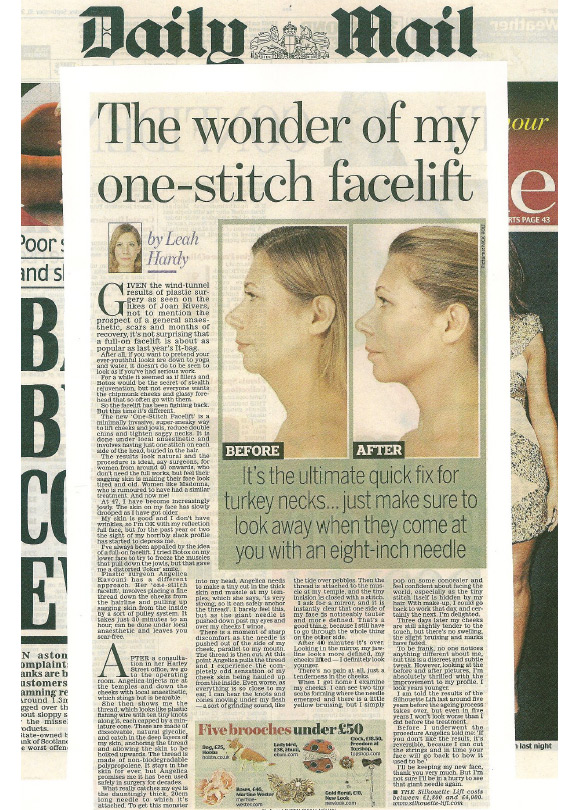