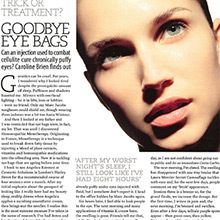 Can an injection used to combat cellulite cure puffy eyes?

Genetics can be cruel. For years, I wondered why I looked tired despite the prerequisite amount of sleep. Puffiness and shadows haunted me. Mirrors with overhead lighting - be it in lifts, loos or lobbies - were no friend. Only my Marc Jacobs sunglasses could shield me, though wearing them indoors was a bit too Anna Wintour.

And then I looked at my father and I was reminded that eye bags were, in fact, my lot. That was until I discovered Homeopathic Mesotherapy. Originating in France, Mesotherapy is a technique used to break down fatty tissue by injecting a blend of plant extracts, vitamins and homeopathic medications into the offending area. Now it is tackling eye bags that are ageing before your time.

I book to see Angelica Kavouni at Cosmetic Solutions in London's Harley Street for the recommended course of four sessions over a month. After my initial euphoria about the prospect of looking like I really have had my beauty sleep, reality dawns when Angelica applies a numbing anaesthetic cream, then brings out the needles. I realise this is the most extreme measure I've taken in the name of research. I've had Botox and barely winced, but suddenly my muscles tighten like rigor mortis is setting in.

Angelica, however, is patient and the injections - three under each eye - take 10 seconds per side and feel like mild pressure. She asks how I feel as she dabs away excess liquid. When I reply, 'Swollen,' she says, 'You are.' And herein lies the real shocker - I look like I've been crying for a week or come second in a fist fight. It's unsurprising, given that I'd had my already puffy under eyes injected with fluid, but I somehow don't expect it. I head to the office hidden by Marc Jacobs again.

Six hours later, I feel able to look people in the eye. The next morning and many applications of vitamin K cream later, the swelling is gone. Friends tell me that, while they had never noticed my puffy problem before, they certainly see the lack of it now. I reconcile myself to that beauty mantra, 'No pain, no gain'.

The second appointment runs smoothly. Knowing what to expect, it's quicker and less muscle-clenching. However, as more solution is used, there is greater swelling under my eyes. I thank the god of foresight that, after round one, I have changed my remaining appointments to the end of the day, as I am not confident about going out in public and do an immediate Greta Garbo.

The next morning, I'm elated. The swelling has disappeared with one tiny bruise that Laura Mercier Secret Camouflage tackles with ease and, for the next few days, people comment on my 'fresh' appearance.

Session three is a breeze so, for the grand finale, we increase the dosage. For the first time, I wince in pain and, the next morning, I'm bruised and swollen. Even after a few days, telltale purple spots appear - then green ones, then yellow. Not even Laura Mercier can help.

So, two weeks on, was it worth it? You bet. I'm a chronic insomniac, but even after my worst night's sleep, I still look like I've had a full eight hours. No one has asked if I've been crying and my Anna Wintour moments are well and truly behind me.