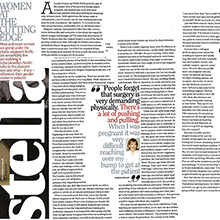 Women at the cutting edge, more and more women are going under the plastic surgeon's knife

More and more women are going under the plastic surgeon's knife, yet remarkably few are wielding it. Julia Llewellyn Smith talks to the pioneers and asks what- if any - difference their gender makes to patients.

A couple of years ago Dalia Nield spotted a gap in the market. One of Britain's few female plastic surgeons, she noticed that more and more women patients were approaching her requiring very intimate work. "With operations like breast work or vulvoplasties, a lot of women can be very embarrassed to be seen by male consultants." she explains. "It occurred to me they would feel more comfortable with an all-female team."

Hang on a minute. Vulvoplasties? After face-lifts, tummy tucks, bottom lifts and boob jobs, is this where the vogue for plastic surgery has brought us? The American Association of Plastic Surgeons says that vaginal surgery is one of the fastest growing trends in its field. Although the British Association world where many women are forced to chose between of Aesthetic Plastic Surgeons keeps no record of procedures four here, a spokeswoman says, "I wouldn't be surprised if they were becoming more popular, because people are more aware of the possibility of surgery for those areas."

surrounded by photos of her family in her consulting room at the London Clinic, a private hospital in central London. A charming, maternal woman aged 58, Nield is the kind of woman with whom you imagine swapping recipe tips, not discussing sizes of labia.

But shame on me for sniggering. "There are people who are born with or develop very long labia," Nield explains in a faintly accented English that hints at her Venezuelan origins. "They have these things hanging, flopping all over the place, and it's terribly embarrassing. They sit on them and get sore; they interrupt sexual intercourse and they need to be made normal. These are not celebrities; these are people like you and me who feel bad about the fact they have a funny-shaped clitoris. Many people are suffering from such deformities and either they don't know they can do anything about it, or they're too shy to ask."

With this in mind, at the beginning of the year Nield set up a unique service: Britain's first all-female plastic surgery team. From first consultation to post-operative recovery, the work is completed by women chosen by Nield - from the anaesthetists to the theatre assistants.

"It's not that I work only with women." she explains, sipping coffee and wearing a smart, dark suit, set off by a huge pendant, a gift from a grateful patient. "But London is so multicultural and we have a lot of Muslim patients, who, depending on how orthodox they are, don't like men to see them, as well as a lot of girls who are just very shy. The fact that they have the option to ask for an all-female service puts them at ease."

What is extraordinary is that there are so few female plastic surgeons at all. Each year in Britain 75,000 people have plastic surgery, 90 per cent of whom are female. Yet only 20 of the country's 200 plastic surgeons are women. The reason is that the long and arduous training the profession demands is incompatible with having a family. Even though recent European directives on working hours have improved conditions, it is still predominantly a man's world where many women are forced to chose between a career and a family.

"When I was a senior registrar there were 29 others at my level and only two were women." recalls Nield, who became a consultant in 1991 after 20 years training. "Every other weekend you were at the hospital and never went home. You had to study in the middle of the night in between operations. Unless you were single or had a very supporting partner you couldn't do it.""

Nield was one of the very few women able to buck the trend. Married to Michael, a barrister she has two daughters now 24 and 19. "We managed because my husband is the most wonderful person I know." she says, nodding fondly a photograph. "He's co-operative, he cooks and we've always worked as a team to make sure the children are happy. But it still makes me shiver thinking back to their childhoods. We had au pairs, which I hated, and then a succession of nephews and nieces helped out, but I still spent a lot of it being torn in wondering if I should give it all up."

"There was one awful time when I was in theatre and got a call... younger daughter, then five, had ... her head open with an inkwell. My elder daughter had to deal with it; would have been unethical for me to leave a patient under anaesthetic, thinking about it now still makes me cry." She gives her sweet tinkly laugh.

Nield's work is divided between reconstructive plastic surgery ... post-mastectomy and fixing cleft and aesthetic surgery such as facelift, liposuction and breast augmentation and reduction. She practises what she preaches. She had her lower eyelids done 20 years ago when she was training. "They were what I called NHS bags. I asked my then boss to... them because I looked dreadful years ago she had her upper eyelids done and in the future will definitely consider more work. She pooh ... my muttering about decadence and vanity. "I think vanity is a good thing. If you look good, you feel good about yourself. Most of my patients can't wear anything nice: they just ... go to the beach and look normal in a swimsuit." She gestures at a "before"" photo of a flat-chested patient. "I mean, who could be happy with those tiny puppies?"

Her most recent experiment has been with Botox. "I was teaching my nurse how to do it, so we used me as a subject and I definitely noticed a difference. I just looked so much more relaxed. Not ironed. Relaxed. "The problem is finding a time to repeat the procedure. I'm so busy at the clinic, I just never have time." But couldn't she do it to herself? Nield shrieks and roars with laughter. "Oh, no! Use a needle on myself? I'm far too much of a wimp."

Just one block away in Harley Street Angelica Kavouni a plastic surgeon who runs her own private clinic, Cosmetic Solutions, knows exactly what it is to be too busy for personal improvement. "I've wanted a tummy tuck ever since my second child was born two years ago," she says, pulling back her jacket to reveal a small roll of flab. "I'm hiding it here because basically I haven't found the time, but I'm hoping to sort it out soon."

Kavouni had a colleague perform liposuction before her wedding to improve her saddle-bag silhouette and post-nuptially had her husband, Lucian, also a plastic surgeon, operate on her nose. "I'd never liked my profile and I was delighted with the result. He reduced the bump but kept it looking natural, not sculpted," she recalls. In return she did the Botox around his eyes. "He's not a vain man but he was looking haggard." She has also given her mother a facelift. Like Nield, she refuses to see anything wrong with wanting to look better. "They say it's not politically correct to want to be beautiful, but I like beauty and I like symmetry. It's something we aspire to. All through history beauty has been an inspiring force for art and literature, so what's wrong if it's an inspiring force for surgery?"

Kavouni is a softly spoken, elegant woman of 40, and the mother of sons aged four and two. During her 12 years of training, however, she often doubted she would marry and have children. "I'm Greek, my family is very traditional and my mother was in despair," she recalls. "But it's very hard to meet someone. You're constantly moving hospitals, so it's hard to buy a house and settle unless you want to end up driving 100 miles every time you're on call. Plus, as well as the operations, you have exams, presentations and meetings. It's pretty exhausting." She finished training at 34 and married two years later. "It was very fortunate I was able to become pregnant very quickly twice. I have two female surgeon friends my age and they're both still single."

Now that she has her own private practice Kavouni has more control of her workload, but life is still challenging. "Operations last long hours. You have to prepare beforehand, and when you get in you never know exactly what you are going to find, so you have to stay for as long as it takes."

Kavouni manages with the help of two nannies. "They're completely used to me saying I'll be home at six and then coming home at nine. I have to employ two of them because no one person could do those kind of hours."

Family issues aside, she is aware or other pressures as a woman. "People don't think of this, but surgery is very demanding physically; you're standing up for hours and there's a lot of pushing and pulling. It's knackering. You need to be strong. The second time I was pregnant it was very difficult reaching over my bump to get at the patient."

The majority of her work consists of "injectables" such as Botox; the rest is divided largely between liposuction and surgery on breasts, eyes and faces.

She also carries out two to three vulvoplasties a week and is adamant they are necessary for hygiene and comfort. "l've only ever had one patient who wanted the procedure not because she had excess tissue but because she thought she'd have a better sexual experience. I had to explain that this wouldn't be the case."

Yet Kavouni feels that being a woman has hindered as much as helped her. "Often I have felt both male and female patients were not particularly convinced by me." she confesses. "They have the idea of a surgeon as a grey, balding, bespectacled older man. They say, "You look very young. How can you be doing this?" Conversely, the pressure on her to look good is far greater than that on her male colleagues. "They don't mind if a male surgeon is wrinkled, but they are very critical of my appearance."

Despite the struggles, what both women stress is how much they adore their work. "I'm not a sculptor by any means, but I always felt I sculpted my bodies," Nield says fondly. "It's the best speciality in the whole surgical world because we are the people who help with healing."

Kavouni agrees wholeheartedly. "Surgeons are craftsmen, but general surgery is deconstructive - doing things such as taking away tumours. In our field you use what you have to make something new, and that's incredibly creative." 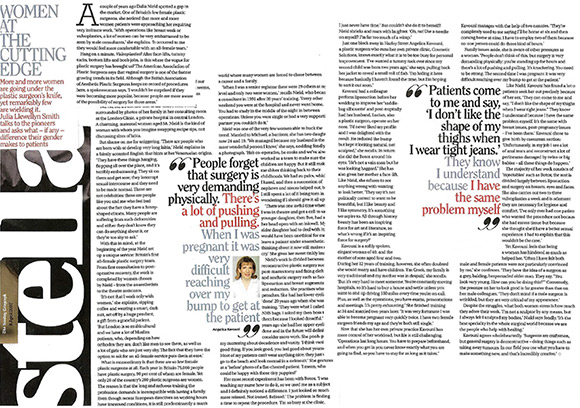