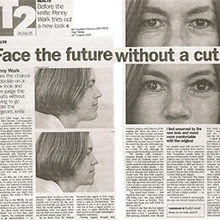 Face the future without a cut

Penny Wark takes the chance to decide on a I new look and then judge the results without having to go under the surgeon's knife.

Almost like magic, the secretary's office became a photographic studio. Umbrella lights on, while screen pulled down over a filing cabinet, and here, under an unforgiving glare, is the plastic surgeon brandishing a small digital camera. Full face, close-up of eyes, then the profile.

A couple of minutes later my face is on a large screen on the wall in her consulting room, and she is trimming down my nose and removing the droopy bit I didn't know I had below my chin. This is what Angelica Kavouni charmingly calls "playing", and while I know perfectly well that cosmetic surgery is a serious business, she's right that this is fun. If you are considering a nose job or getting rid of the baggage around your eyes, she can use computer imaging to show how your new nose or new eyes could look.

You can then say, a bit more off there, please, or no more stretching, thanks, I'd rather not look like Anne Robinson. And instead of peering in the mirror on those bad mornings, pulling up the skin above your eyes and wondering how you might look after surgery, the result is there in front of you.

Well, that is the theory. As any decent cosmetic surgeon will tell you, and Angelica does, the aim in the consultation is to get a precise feel for what the client wants, and because individuals vary in how they heal after surgery, the computer simulation is an approximation - no guarantees here. So this is a two-way process - she is telling you what is possible (no, if you're 50, she can't make you look like you did at 20) and what she would advise, and she is establishing what you mean when you say that you want to look natural, as most people claim they do.

As we know from the surgical bloomers that appear in Heat magazine's terrifying Circle of Shame, this word is open to interpretation. "My objective is not to do a good operation but to have a happy patient, so you have to make absolutely sure that you're on the same wavelength," Angelica comments.

Having vaguely thought that cosmetic surgery could dispose of the sagging skin above my eyes, I was curious. Yes, a slice of skin and some fat is removed, the stitching is in the crease, there is "tightness" or discomfort but no pain, you are home by the end of the day and, with make-up, can be back at work within a week, I'm told, although for some people the healing is protracted.

The trouble with computer imaging, though, is that while it is very good at sculpting noses and chins - a vast improvement on the earlier method of showing before and after pictures of other people - the software has its limitations and is less good at showing how tidied-up eyes would look. The best that Angelica can do is to show that my eyes would look bigger, especially, she suggests, if I also had my lower eyes done (again, a slice of skin is removed and the cut is a millimetre below the eyelashes). And at least the simulation is of you.

"You would look fresher - that would be the word - less tired, while still being you," she says tactfully. "Like you'd been on holiday. Only people who know you well would be able to spot it."

I have to say that she has tapped accurately into my neuroses. Tired and worn is how I sometimes feel, this morning included, even though my sensible head tells me that I'm neither, but I certain1y don't want to look as though I've been tampered with. Sometimes people bring in pictures of themselves in their youth, Angelica says, so I show her my Tube pass photograph, which happens to have been taken in 1988 and shows a bright-eyed creature in her early thirties. Which is mildly irritating because I had no idea at the time that I looked that good. Bugger.

So how do I feel now? Not under pressure, certainly, because there is no hard sell here. I ask Angelica if she has had any surgery and she says yes, Botox and a nose job, done by her husband, also a cosmetic surgeon, "I said I'd had a skiing accident - no one believed me."

Her style is relaxed: most people, she says, see several surgeons before they make a decision. She doesn't think I need more than the eyes I and the under-chin liposuction. Just the £4,000 plus the lipo, then.

I admit that I find it all vaguely seductive, although when I examine the before and after images later I feel unnerved by the startled look I have acquired in the manipulated image, and infinitely more comfortable with the original. Lesson learn, I think. I know, too, that going on holiday and drinking the endless litres of water one is supposed to consume each day makes me look fresher and less tired, without going anywhere near a scary scalpel.

My friends and colleagues are stem, insisting that I'm fine as I am and telling me about people they know who have foreheads that don't move (usually Botox. I have learnt) and others who look perpetually surprised. Ageing is OK, we agree with exaggerated enthusiasm, it's good to have character in the face.

Or, as one colleague, a mistress in the art of back-handed compliments, puts it: "You look better in the baggy-eyed picture." Thanks. 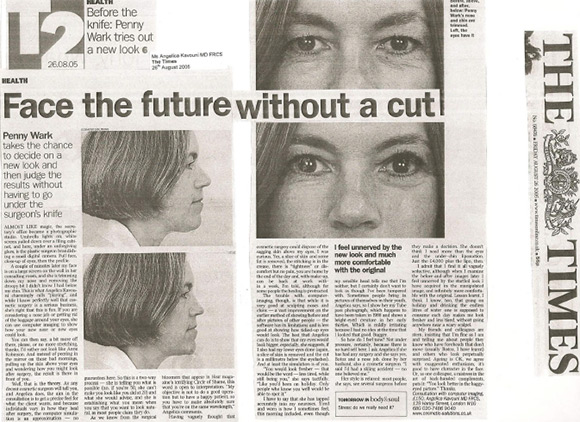