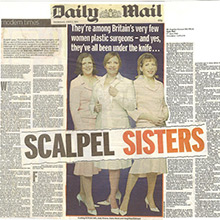 Every year, 75,000 Britons have cosmetic surgery, and 90 per cent of those are women. Yet only 10 per cent of this country's 200 plastic surgeons are women. It takes a minimum of 12 years to qualify and all are specialists in reconstructive and aesthetic surgery. Here, three female plastic surgeons tell Rachel Murphy what it's like for women working in this traditionally male-dominated profession, and reveal they are not averse to going under the knife themselves...

Judy Evans, 52, was one of Britain's first female NHS plastic surgeon from the Nuffield Hospital Plymouth. She has two children, Robert, 22, and daughter Alex, 18, and lives in Devon with her husband Gerald, 54, a former consultant urologist who has Parkinson's disease. She says:

When I meet new people at dinner parties I try to keep very quiet about what I do. As soon as I say I'm a plastic surgeon the whole evening is dominated by talk of operations. Once a woman sitting opposite me demanded quite seriously: "Do I need a facelift?"

Another common question is whether I've had anything done myself - fortunately I don't mind admitting that I have.

Six years ago I had liposuction on my stomach. It had been flabby for 12 years since I'd had my children and my tummy was so big people used to ask whether I was pregnant. I put up with it, mainly because I was to busy working to have anything done, but I thought about it often. I would't wear anything that tucked in and I was event so embarrassed to go swimming at the gym.

Then in 1998, I needed a hysterectomy. I had to have a general anaesthetic and time off work, so I had the liposuction done at the same time.

It would have cost £3,400, but a male plastic surgeon who trained me and is a very good friend of mine did the operation for free.

It tool me at least three months to recover fully from both operations, but it has changed my life enormously. I can now wear fitted clothes and it's also stopped me thinking constantly about hiding my waist.

Ultimately, it's made me feel much more confident about myself - and that is what plastic surgery is all about. It's not pure vanity.

But while surgery can boost self-esteem, it can't perform miracle. I've had to turn away several women who have wanted noses thinner than Barbie, and every month or so a young woman will ask me to create enormous breast from her own 32A assets.

One woman hoped a breast enlargement would patch up a bad relationship, and I had to explain that no surgery can do that.

I will have my upper eyelids done as I get older, and would't rule out other surgery if I felt it would improve my life.

Breast enlargement is the most popular operation I do, and sometimes I perform four a day, usually taking women up to a C cup.

Some have been belittled by a male doctor, and have burst into tears when they've found me because they're so relieved. One woman who wanted a breast reduction was told by her male GP she had "gorgeous knockers" and shouldn't have any surgery.

I studied in London and Hong Kong and then decided to specialise after being allocated a job in plastic surgery as part of my training. I loved it, in spite of the sexism - one male surgical consultant said the only way I should get on was if I demonstrated my commitment by being sterilised first. Despite that comment, I have two children and in the early days hired a nanny, which was considered quite radical at the time. If anything that man's attitude has made me more determined to succeed and now I earn up to £200,000 a year.

Dalia Nield, who is in her mid 50s has worked as a plastic surgeon for 13 years and is based at the London Clinic, Harley Street. She lives in North London with her husband Michael, a barrister, and they have two daughters, Fabiola, 21, a language student and 16 year old Amanda. She says:

I had my lower eyelids tidied up whenI was still training 15 years ago to get rid of what I called my "NHS bags" - from my day working at St Bartholomew's Hospital. They looked terrible from years of working long hard hours, and there is a family tendency to have bags under the eyes that I had definitely inherited.

I was thrilled with the result and all these years on I still think they look good. I felt instantly fresh and normal, instead of worn out and old before my time. I make no secret of it and don't mind telling patients.

I think vanity is a good thing, and if you look good, you fell good about yourself. It tells other people you are the sort of person who likes to make an effort. Eyelid surgery gives you the best results for minimal effort.

You can have them done under local anaesthetic and go home the same day.

Forty percent of the aesthetic work I do - as opposed to reconstructive work - is liposuction. I frequently do saddle bags and love handles, which are areas that women always complain they can't change with diet and exercise.

Meanwhile, I get a steady stream of male City high-flyers who want eye or facial surgery. They feel that if they look saggy and old, they will be viewed as not coping with their job.

They don't have the time for surgery and don't want people - including their husbands - to realise they've had anything done.

Patients are usually pleasantly surprised to see a female plastic surgeon. They often say they can talk to a woman more easily than to a man, which is crucial.

Also, a male surgeon often won't think about where to put the scar on a woman's body. I get women coming to me for secondary repairs because the male surgeon who operated on them the first time hadn't thought about putting the scar in the right place to allow them to wear a bikini.

Patients often bring in photos of celebrities. Men want a nose like Orlando Bloom, women want breasts like Marilyn Monroe or Liz Hurley. However, once someone came in and wanted to be Liz Hurley, so I sent her away. I can't reinvent people, I can only refine and enhance what nature gave us.

If someone asks for Jordan's breasts - which is rare - I tell them they need a different surgeon. I won't make someone look terrible.

Likewise I would not have made Leslie Ash look like a fish. It's against what beauty is all about. It annoys me that cases like that give this industry such bad publicity, but the worst thing of all is doctors who do surgery without proper training.

I chose to become a plastic surgeon after seeing it first-hand at medical school and thinking what a beautiful profession it was because it really can change a person's life for the better.

I've never felt victimised at work because of my sex. I've simply ignored the occasional nasty remark I've overheard male surgeons muttering about women being better off at home than in theatre.

However, in the past the training and hours were so long and inflexible that women couldn't do it and have a family at the same time. When my children were young I took six months off with each, then had au pairs and several nieces helping me out. I remember being in the operating theatre when I took a call to say my little girl had split her head open. I had a patient under anaesthetic and it would have been immoral to leave, so I had to leave my older daughter to cope with it. It still makes me cry to think of it. I felt more guilt tan a man probably would have in that situation.

Now the process is slowly getting female friendly and there are more women training to be plastic surgeons than ever before.

Even so, as a woman you can't be a plastic surgeon and a mother unless you have an incredibly supportive man behind you. I couldn't possibly have done this without my husband.

Angelica Kavouni, 37, runs a private practice called Cosmetic Solutions, in Harley Street, London. Her husband, Lucien Ion, 42, is a consultant plastic surgeon for the NHS at the Chelsea and Westminster Hospital. They live in West London with their one-year-old son, Julian.

Since I qualified as a plastic surgeon three years ago, I'm a lot more critical of my body. I'd always been unhappy with my profile because I had a hooked nose which had a hump...probably get it done when the time was right.

That time came three years ago when I finished my training, and had the time and money to prepare for it.

My husband is a plastic surgeon and, although we weren't married then, he did the operation at the Cromwell Hospital in West London.

I had complete confidence that he would perform the operation well - plus I knew exactly what I wanted to achieve, so I wasn't all worried about the two-hours procedure.

I'm delighted with the result because he reduced the hump but kept my nose looking natural, not sculpted.

I would definitely consider more surgery in the future. If I will have another baby, I'll lock into having a mini-abdominoplasty or tummy tuck, to tidy up my stomach. I'll also consider facial surgery as I get older.

This industry gets a lot of criticism, but in my experience it is all about improving quality if life, not pandering to vanity.

That's why I went into it. I knew I could make a big difference to people's lives, although I've had to make a lot of sacrifices along the way.

I didn't have a baby until I was 35 because of my career. I trained at Bristol University and various London hospitals.

I deliberately didn't go into the NHS, because the hours are too long and wouldn't have been able to devote any time my family.

Thankfully I have a nanny, a cleaner and a babysitter who help my life to run smoothly and my mum helps too. I work three full days a week and two half-days and earn about £150,000.

I've operated on three television presenters - two men and a woman - who had different types of facial surgery.

They all said they were worried that if their looks deteriorated their careers would too.

Some high profile names are even trying to offset the cost of facelifts against tax, as they fell youthful looks are essential to their earning potential.

Some women do believe they can simply "buy" a new body, or they don't stop to consider whether surgery would be appropriate.

I've turned down women who wanted enormous DD glamour model breasts because their bodies were too petite to support them.

Occasionally a husband will try to dictate what his wife wants - typically a breast augmentation - which makes me very uncomfortable. Then some women complain their husbands don't even notice they've had surgery, but that's a good thing.

The best results are the ones other people don't notice but that make a big improvement to... 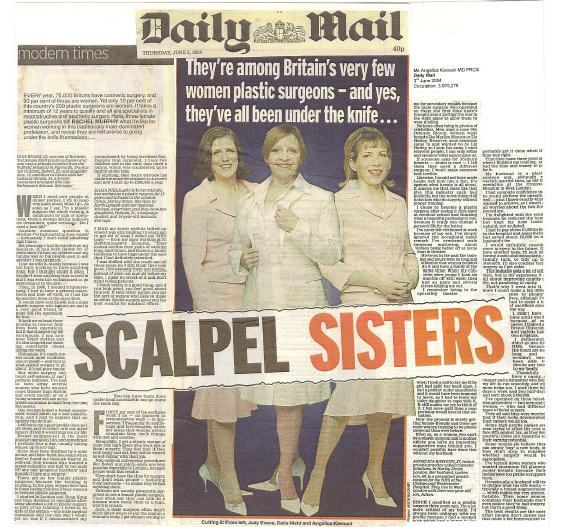