Consumers have been bombarded for so long about "the best" anti-ageing treatments that it's become hard to tell fact from fiction. Every few months a new wonder fix comes along that promises great results without any tell tale signs! We ask expert Plastic Surgeon Ms Angelica Kavouni to help unravel the mystery of anti-ageing treatments and discuss her favourites.

Most plastic surgeons would agree that Botulinium Toxin is the single most important product in the anti-ageing battle. It can wipe away years with one simple, safe treatment. Both men and women are taking advantage of its benefits of frown lines, crow's feet, lip and neck lines. It lifts and relaxes at the same time! "I often use some botox injections before surgery as there is some evidence to suggest scars heal better afterwards" says Ms Kavouni.

I’ll end up frozen with no movement: It all boils down to how much-how often! In the hands of a competent practitioner, movement can be retained whilst tell tale lines are removed.

It is addictive-I’ll need increasingly frequent treatments once I start: Treated muscles are used much less so in fact as time goes on Botox™ is required less often!

It is a poison: This is true if ingested! However injected in tiny doses it is absolutely safe and has been tried and tested for over 20 years.

Peels use acids to stimulate natural collagen production, something that reduces as we age, leaving our skin void of elasticity and increasing fine and coarse lines. Glycolic and other plant acids are ideal for younger complexions or for acne problems. TCA solutions require considerable expertise, they are medium to deep peels more effective against sun damage and pigmentation problems. "I believe once we turn 30 a chemical peel every two years works wonders and should even be an annual feature once we turn 40" says Ms Kavouni.

Black/asian and olive complexions can't have peels: Pigmentation is an increased risk with these skin types however in the hands of an experienced practitioner it can be well controlled with careful skin preparation and after peel skin care.

I can't go in the sun afterwards! A period of 6-8 weeks is recommended for avoiding direct and prolonged sun exposure and that includes sun beds.

There has recently been a great deal of press discussing the benefits of this product, but is it as good as they say? Sculptra has produced some very convincing results especially when used to replace facial volume losses that we all experience as we age It can help to lift the cheeks and jowls and to reduce lines and hollows around the eyes. The results last for 2-3 years when a top up would be required. "Our current thinking in rejuvenation is to maintain the full but at the same time sculpted appearance of a youthful face, stimulating the skin's own cells" says Ms Kavouni "not simply pull and tighten".

Sculptra is just another type of hyaluronic acid filler: Sculptra isn't a "filler". It is made from Poly-Llactic acid that stimulates a natural build up of elastin and collagen under the skin, filling out hollows and smoothing lines.

Fuller lips make for an attractive, feminine appearance often softening a mean expression. Our lips become thin and lose shape as we age. The horrors we have seen in the past have to do in part with the products that were used and more importantly with the aesthetic of some practitioners creating a "sausage roll" upper lip says Angelica Kavouni. These hyaluronic fillers will also plump-up lips, are temporary and need repeating every 3-4 months.

I’ll end up with "trout pout" lips: As with everything it boils down to how much-how often.

They feel hard: The latest Hyaluronic acid fillers have such advanced technology that can be hardly felt in the lips. For thin lips a very new ,soft silicone implant is also available.

I'll be stuck with them if I don't like it: In the unlikely event you don't like the result, it is easily reversible with no scarring left, all it takes is some injections to dilute the product that was used!

Fraxel® Laser introduces thousands of tiny but deep columns of light into the skin and is known as microthermal treatment. Damaged and ageing skin is targeted by the laser creating microscopic "wounds" beneath the top skin layer which in turn trigger natural production of collagen and new skin cell growth.

The beauty of Fraxel® treatment is that it also leaves areas of skin untouched – unlike the lasers of old. For every microthermal zone produced by the Fraxel® another area around it is left untreated - this is described as fractional treatment. In this way the skin heals much faster resulting in a very short "downtime" of around 2 days. At least 2 sessions recommended.

I can't spare enough time off work to heal: The recovery time for Fraxel is in fact minimal. The skin does look red and a little swollen for a few days but soon recovers.

I've heard its agony and turns you blue: The treatment is not pain free but using the latest cooling device in conjunction with strong anaesthetic topical cream discomfort is kept to a minimum. The lotion applied to the skin is blue and helps the light waves travel through the skin layers more effectively but the blue cream is removed before you leave the office!

Most of us approach surgical intervention with extreme caution, and rightly so however when gravity has taken its toll, surgery is sometimes the only option in the anti-ageing battle. In fact, statistics show that an increasing number of both men and women are looking to tackle the early signs of ageing with small "nips and tucks".

Ms Kavouni: "Latterly, around 50% of those seeking surgery for facial rejuvenation are between 35-50 years old unlike a decade ago when plastic surgery was concentrated within over 60's age group. When we reach the late 30's and early 40's skin begins to lose its laxity and the skin can show first signs of loosening, this is actually a prime time to consider more invasive intervention as there isn't much loose skin to remove and the results look less dramatic - more refreshed."

The current philosophy surrounding facial rejuvenation is to adapt the type of surgical lift to each individual, using their underlying bone structure as a template so when the tissues are re-draped, the face "sits" naturally and is not pulled tight in unnatural fashion. The resulting appearance is younger, fresher and not stretched unlike the old "Hollywood" facelift.

Techniques have been polished and modified to defy gravity in a more effective way. Instead of only lifting one area surgeons now prefer a combination of lifts to give a symmetrical result.

Ms Kavouni: "The availability of the endoscope has been one of the most important recent advances within the field of plastic surgery and I'm sure its use will be incorporated into a wider range of cosmetic procedures before long. This specialised camera is placed under the skin through 4mm slit like incisions hidden in the scalp and allows us to perform lifting of the brows, cheeks and jowls with minimal scarring, less bleeding and a much quicker recovery than traditional surgical techniques."

Thank goodness the days of the perpetual surprised look are long gone. As we understand the anatomy better we now aim to create an attractive arch in the lateral part of the eyebrows, releasing and lifting tissues in the temple area. In the middle part the muscles are released to reduce the frown lines with out pulling between the eyebrows. The endoscopic technique helps to keep scarring to a minimum. New, sophisticated devices (Endotine™) to fix the tissues in the lifted position also help to maintain a natural look. Expect some swelling and bruising around the eyes for about ten days.

Ideal for patients who prefer fuller cheeks, it also reduces the loose skin under the eyes and softens deep nose to mouth lines. During the procedure the fat pads of your cheeks will be repositioned up and over the cheekbones where they belong. Some patients request an attractive almond eye shape. Again the endoscope helps to keep incisions well hidden but there is some swelling for a few weeks after the procedure.

This technique enables proper tightening of the facial muscles through an incision well hidden inside the ears and is often combined with neck liposuction to improve the neck contouring. This method is great for people wanting a gentle lift of the jowl area and have less sagging skin. Depending on the exact type of the muscle tightening sutures it is known also as MACS lift.

This procedure should not be confused with a "mini facelift" though - this procedure was very popular a few decades ago but just pulled on the skin, creating some unpleasant stretched scars.

This new age invention is a good and effective alternative for women who are not quite sure about surgical intervention, during which the tissues are lifted and fixed in place with barbed sutures. 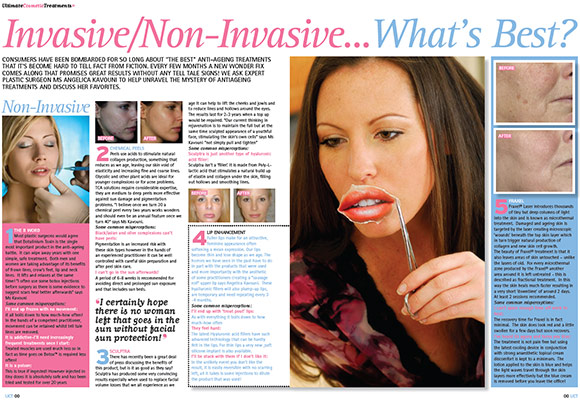