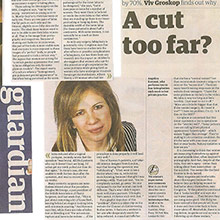 A cut too far: the rise in cosmetic surgery on female genitalia

Before she had even turned 10, Anna had started worrying that there was something physically wrong with her. "I would look at other girls in the shower, and think, 'They don't have what I have,'" she says, and wearing a pair of jeans became uncomfortable. The issue was her inner labia. Anna felt that they were too large, and as an adult she grew increasingly self- conscious. "During intercourse they would get caught up and go back into my body," she says. "I had one sexual partner who mentioned it [negatively]. He was an idiot, but I knew that it was not the norm. I just wanted to be able to have intimacy without worrying about it."

Now in her mid-30s, Anna [not her real name], from London, recently had a procedure known as labiaplasty, which involves cutting back the inner labia. It costs around £3,000. She says that she is pleased with the results. "It's a weight off my mind. I'm so glad I had it done."

Anna's operation was performed privately and, although there are no industry-wide figures, there are clear signs that labiaplasties in the private sector are increasing. Last year, a representative for the medical group Surgicare said that the company had seen a threefold increase in the procedure in 2007/2008, and that enquiries had risen sevenfold in three years. Perhaps more surprisingly, rates are also rising in the public sector. A study published in the British Journal of Obstetrics and Gynaecology last week revealed that, over the last year, there has been an increase of almost 70% in the number of women having labiaplasty on the NHS. There were 1,118 in 2008, compared with 669 in 2007 and 404 in 2006.

One of the authors of the study, Dr Sarah Creighton, works as a consultant gynaecologist at the Elizabeth Garrett Anderson Institute for Women's Health in London. She says that "on the NHS we are noticing more and more women coming to have their labia removed. It's the tip of the iceberg because there will be more women seeing cosmetic surgeons privately."

When I began looking into the reasons for this enormous rise in surgery, my initial assumption was that women must be having it because they had suffered some sort of unusual physical damage, possibly in childbirth. It turns out that this was naive; in the vast majority of cases, labiaplasty is simply a response to the physical appearance of the labia, a desire for more "attractive" external genitalia (known collectively as the vulva).

There can be medical reasons for this surgery, Creighton says, but only in extremely rare cases. "There are unusual hormonal conditions that make the clitoris or the labia abnormal. Occasionally, women can be born with labia that have not developed properly. Some people can be excessively large. But almost all of the women seeking surgery do not have a medical under-lying condition. When you examine them, they are completely normal."

Despite this, she suggests that it is very difficult for doctors to refuse requests for labiaplasty if the patient argues that her insecurities are psychologically damaging. "They just need to get a referral from their GP to a gynaecologist." As to how the surgeon decides whether an operation is necessary, she says: "There are no clear guidelines." She believes, however, that counselling would be a better alternative for many of these women and that there is a danger that medically unnecessary surgery is taking place.

Those asking for this surgery on the NHS, Creighton says, "can be very young – sometimes as young as 10 or 11. Mostly they're in their late teens or early 20s. There are two pairs of labia: the fat pads on each side and the thinner, slightly more frilly skin on the inside. The ideal these women want is not to be able to see their labia minora at all. That is the image from porno-graphy and magazines. Because of shaving and fashions in underwear, this part of the body is more visible now. And everyone is more exposed to these images of a 'perfect' body, so people feel pressured to look a certain way." She argues that women are aiming for "a certain genital appearance that used to be an obligation only for some glamour models". The report warns of a culture where a "homogenised, pre-pubescent genital appearance" is therefore being perceived as the norm.

Angelica Kavouni is a leader in the field of labiaplasty – in her private practice, she performs between two and four of these operations a week, for women aged between 18 and 60. She says that her patients are not willing to accept that the physical appearance of their vulva is perfectly ordinary and healthy. "It's not pathological for the inner labia to be elongated," she says, "but it does pose an issue for a number of women. They want them to be level or inside the outer labia so that when they are standing up there is no tissue protruding or hanging down. The desirable width of the inner labia [for these patients] is about half a centimetre. With some women, it can naturally be as much as three centimetres."

As with any surgery, labiaplasty is potentially risky. Creighton says that there have been no studies into the after-effects or possible complications of labiaplasty, nor has there been any research into the impact on childbirth: she suggests that women who opt for this procedure might experience the same problems while giving birth as women who have undergone ritualistic female genital mutilations. Allison Henry, a US woman who had her labia reduced after a vaginal prolapse, recently wrote that the operation "was brutal. All [the] patients who say it doesn't hurt are lying. I'd rather get my teeth pulled out than do that again." In Anna's case, she was unable to walk for two days after the operation, and was in recovery for six weeks.

Many cosmetic surgeons are nonetheless relaxed about the procedure. Douglas McGeorge, a past president of the British Association of Plastic Surgeons, said last week that, "This is just about removing a bit of loose flesh, leaving behind an elegant-looking labia with minimum scarring." And Kavouni says that, while there are risks of infection or bleeding and "the sutures can rupture and have to be redone . . . if the procedure is done properly, it will heal very well."

One of Kavouni's patients, a 47-year-old interior designer from London, says that having the operation was "exhilarating". "I first went to see a doctor when I was 15, without my mum knowing, because I thought I was growing a willy. They just said, 'You're completely normal, go away.' No one explained to me that women can look different. That's why I didn't experiment with many partners. I thought, 'He's seen it. I'd better stick with him.'"

For a graphic depiction of this "problem", there is a video clip on the website for Channel 4's Embarrassing Bodies series. It features a woman in her 40s who desperately wants her labia reduced. A consultant tells her that she has a "normal variant" but then recommends cosmetic surgery to remove the "excess skin". There are many heartbreaking responses on the website from teenagers: "I have the same problem as the lady in the video. My labia is way too long and feels horrible. I just want to cut it off." "Mine are a little bit bigger than that. If she needed surgery, do I need it too?" "I hate my problem. I'm 13 – is it free on the NHS?"

Creighton is concerned that this trend represents a rise in operations on the "worried well". "Some patients I see are calling [their physical appearance] 'hypertrophy' – which means 'bigger than average'. They're making it into a medical condition. But it's the same with your nose or your feet or your boobs. Natural variation is how we are."

It is distressing to think that women are measuring themselves up against an unattainable ideal, often inspired by pornography. And that, despite all the risks, they see surgery – rather than talking about their insecurities – as the solution. This seems like the final frontier in body hatred.

Many surgeons are comfortable about this surgery because they believe they are helping women to feel better about themselves, says Creighton. "If the patient is convinced that it 'looks horrible' and says she can't wear jeans . . . They believe they are doing some good. One thing we have noticed is that people will have it done and then come back to have more taken off. Meanwhile, there is no regulation, no guidance and no one is following up on these women." 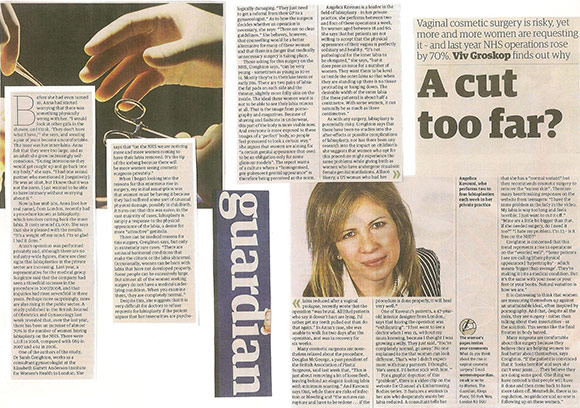