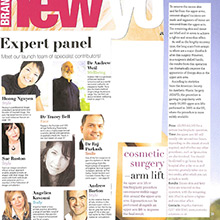 An upper arm lift or b brachioplasty procedure can remove visible saggy skin around the upper arm area. Liposuction can be performed alongside an upper arm lift to improve the final result.

As well as the lengthy recovery time, the long scars from armpit to elbow are a major drawback after this surgery. However, in a surgeon's skilled hands, the results from this operation can dramatically improve the appearance of droopy skin in the upper arm area.

According to statistics from the American Society for Aesthetic Plastic Surgery (ASAPS), the procedure is gaining in popularity with nearly 16,000 upper arm lifts performed in 2005 in the US, where the procedure is more widely available.

Time: An upper arm lift will usually take around two hours, depending on the extent of work required, and whether any other procedures, such as liposuction are also involved. You should be allowed to go home from hospital after a day or so and recovery generally takes one to two weeks, after which you can go back to work.

Results: Excess skin and fatty tissue are removed in this operation, with the remaining skin lifted to achieve a tighter and smoother effect.

After losing a lot of weight, I had a lot of unsightly saggy skin on my upper arms. No matter how much I dieted, exercised and worked my arms in my job as a hairdresser, my arms simply wouldn't tone up. I was embarrassed to wear short-sleeved tops and felt I had to cover up all the tune, so I had a consultation with a plastic surgeon to see what could be done.

I saw Angelica Kavouni who suggested an arm lift, where the excess skin between the elbow and armpit is cut away and the skin is sewn up to look tauter. Afterwards, my arms were very sore and the scars ran along the underside of my arm. I needed around three weeks of work and had to keep my arms propped up on pillows for the first week.

One year on, the scars have faded a lot and within six months they should be totally healed. Because of where the scars are placed, it is also very unlikely that anyone would see them without me pointing them out!

It is a very new procedure but I would definitely recommend it to anyone who cannot shift the excess skin on their arms. I used to think my saggy arms were so ageing; now I feel much younger and more confident. It has definitely opened up my wardrobe a lot more and provided just the boost to my self-esteem that I needed. 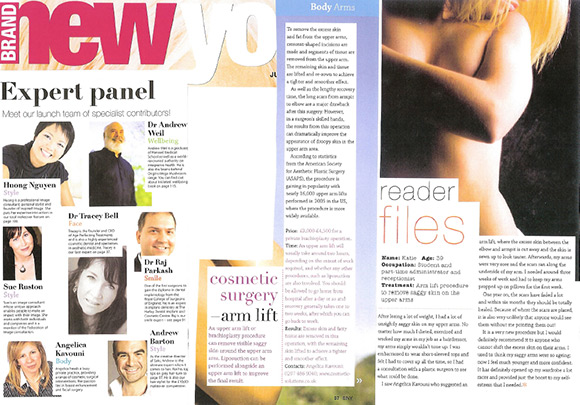