The male body crisis, and this was before he had surgery

It used to be women who worried about their looks, but now it's the turn of men to fret about manbags and menopaunches, Fabulous investigates the new bloke breakdown. By Lucy Bulmer and Eimear O'Hagan

Super-fit, handsome and with a stomach that would make Brad Pitt insecure, Dean McEvoy doesn't look like a man in need of cosmetic surgery. Yet after this picture was taken, Dean spent £3,000 on a painful operation to remove the bags and wrinkles under his eyes. And before you ask, we couldn't see them either.

The 39-year-old businessman from Preston, Lancashire, was in the grip of a bloke breakdown - a term coined to describe the increasing number of men consumed with dread about the ageing process.

Dean became paranoid about his image after his teenage daughter teased him about his looks.

"She started joking about the bags and lines under my eyes", the divorcee explains. "I'll work out five times a week and am very conscious of my body and appearance. I certainly don't think of myself as old."

Like Dean, more and more men are resorting to nip/tucks to hold back time. A new glossary of terms such as moobs (man boobs), menopaunches (male muffin tops) and man bags (guy eye bags) are only further fuelling this male body crisis. Coupled with this, guys are drawing inspiration from stars such as George Clooney, 47, who publicly admitted having the manbags under his eyes removed to make him look "younger and fresher", U2 frontman Bono, 48, is also suspected to have had the area around his eyes "freshened up", while The X Factor's Simon Cowell, 48, has admitted to having Botox and has also had dental veneers fitted.

"I began to worry that I wasn't looking and feeling as good as I should," explains Dean. "Looking in the mirror every morning, the face staring back at me looked older than I felt. The bags and wrinkles became increasingly obvious to me, and I knew I wouldn't be happy until I'd done something about it, looking good is important to me, and in the circles I socialise and work in, there is a pressure to look your best. I didn't want people thinking I was getting old before my time."

Dean decided the only answer was to have his man bags removed in an hour-long operation carried out by Harley Street surgeon Angelica Kavouni.

While people have commented on his fresher and more youthful look, he has not publicly admitted to surgery as he feels there is still a taboo attached to it for men.

But he adds: "I think my generation of men are becoming very proactive about identifying things in their life they're not happy with, and doing something about them. Since having the surgery, I'm much happier when I look in the mirror and feel I've regained some of the confidence I'd lost.

"Why wait until you're in your 50s, realise you've let yourself go and make yourself feel better by buying a Porsche? I'd rather solve the problem now with a minor operation, and avoid becoming one of those men who have a cliched mid-life crisis."

The bloke breakdown came-earlier for Spencer Clayden. Despite being just 26, he paid £2,500 for Advanced Laser Lipo, which sucked fat out of his stomach, giving him the washboard rum he'd dreamed of, "I used to get embarrassed about getting changed in the gym in front of... 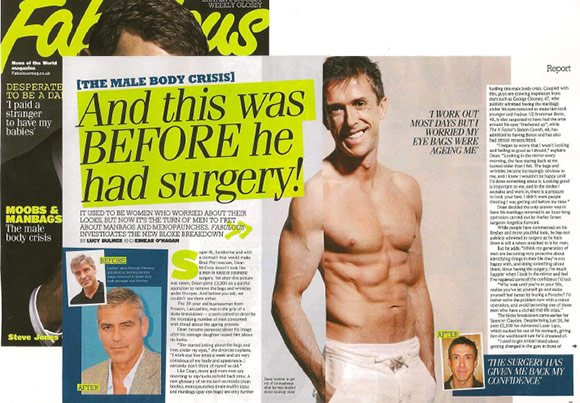